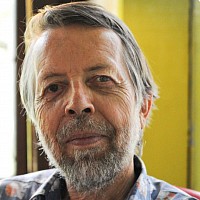 BOOKS BY PIERRE WITTMANN
Made with SimDif
Created by Pierre Wittmann