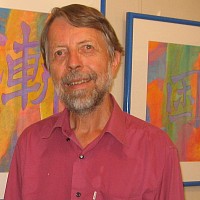 Pierre Wittmann is born in Geneva, Switzerland, on July 7th, 1943. His father is a writer, and his mother a painter. He studies architecture at Geneva University and receives his diploma in 1970. In 1971, he creates a Graphic Arts and Publishing Company that he runs until 1976, when he leaves Geneva and settles in Musièges, Haute-Savoie, a small village in France. There he devotes most of his time to painting, but practices also architecture, sculpture and design. He undertakes several study trips to the United States, to South America and to the Far-East, before to settle in 1982 in Paradise Valley, Arizona. He discovers French Polynesia in 1983 and decides a few months later to live in Tahiti. To pursue the study and practice of Buddhism, which he has discovered in Tahiti, he moves to Thailand in 1988. He lives first in Bangkok, then from 1992 to 1997 in Hua Hin, along the Gulf of Siam and, since 1997, in Chiang Mai, in the North of Thailand. Since he left Europe in 1992, PW has spend nearly all Summers in France, first in Musièges, and, since 2007, in Provence, at Cabrières d'Aigues, on the South of Luberon.